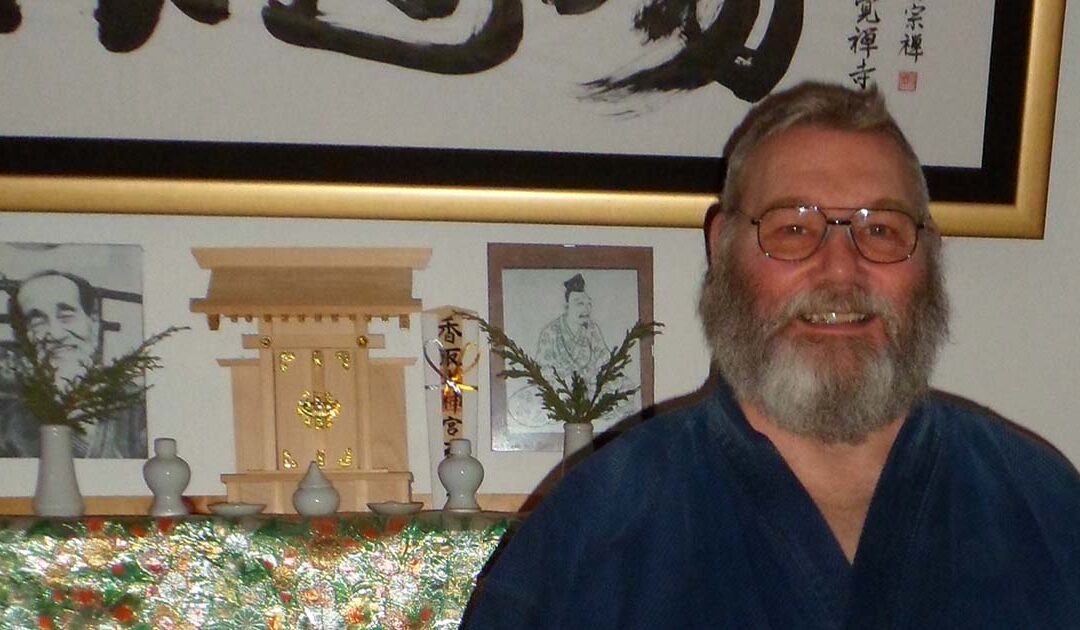 This is harder to write than I thought it would be.

It occurs to me that some point while I’m writing this, Gill Sensei is heading home. When I went to visit him for the last time on Tuesday, he said he was going to hang out with Ip Man and the other masters when he got there. I asked him to save a keiko for me.

I was a younger man when I first stepped into the dojo of the St. Catharines Kendo Club. My wife and kids were taking karate at the Glenridge Martial Arts Academy and I’d heard there was a kendo club starting there. I’d been out of kendo for several years at that point and for various reasons I wasn’t sure that I wanted to start up again. However, one day I made up my mind to check the club out. I dusted off my equipment (which amazingly still fit – sort of) and trotted down to the dojo, kids in tow.

“Just going to watch” was what I thought but that wasn’t what happened. Gill Sensei appeared, filling the doorway of the dojo. He knew of me, having heard from Picard Sensei that there was a student’s parent who had done kendo. Anyway, one thing led to another and before I knew it, I was back in a kendo dojo.

I’d like to say that Gill Sensei and I hit it off right away, but I’m not sure we did. The younger me had attitude, compounded by me being nidan in kendo to Gill Sensei’s shodan. He was 8th dan in Jiu-jitsu mind you, plus being a former police officer and having years of real-world hand-to-hand combat experience. Still, that didn’t stop a little greenhorn like me from feeling like I knew more about kendo than he did.

It probably didn’t help that there was a kendo tournament coming up in a few weeks. Despite my lack of training, the other club members encouraged me to attend, so I did. That year’s S.W.O.R.D. tournament was unique because it featured a double-elimination format. This meant players who lost their first match got to go into a second round. I lost my first match, as did Gill Sensei. When I went to check out the tournament tree, I found that we would be facing each other. Uh oh.

The St. Catharines club members were all clustered together around Gill Sensei. There were a few oohs when I shared the news with him. He asked me if I had anything to say. My response: “Sayonara” (goodbye in Japanese). Somewhat surprised, Gill Sensei said “What did you say?” and I replied with “Sayonara, Sensei”, with a bit of a smile and a bow. Yes, I’ll admit that was a really smartass move.

I won the match, but not after he took the first point – a really nice kote. My memory thinks I got the point back with a do and then a kote to finish. It wasn’t pretty, but I won. That didn’t help our relationship.

I chafed at what seemed like arbitrary drills. In my head I questioned his methods, his routines. We clashed a few times over his rules but came to compromises over time. Eventually I got my 3rd dan and decided I had to move on. I invited him to lunch at his favourite Chinese restaurant (Cosy, on Lake St.) to let him know. He thanked me and wished me well, and that was that. No hard feelings, only well wishes.

Eventually I opened the Hayakawa Kendo Club in Welland. Starting a club of my own seemed insane but the right thing to do. I’d go to train with Gill Sensei and the St. Catharines folks from time to time but that dwindled as life got busier. Gill Sensei always maintained an interest in how I was doing, providing perspectives over post-practice coffee.

Running a club of my own, dealing with students, their parents, my own training needs, and the needs of my growing family, I came to better understand Gill Sensei’s training perspectives. Call it growing up, maturing, getting more life experience, or whatever you want. Knowing what he knew, he had a sense of what was needed in the dojo. When I was young, I didn’t get it. Now that I’m older, I’m finding myself adopting some of his ideas. Go figure.

If it wasn’t for Gill Sensei, I wouldn’t have gotten back into kendo. It wasn’t on my radar, so to speak. The nearest club was in Burlington, and I wasn’t in touch with any of my former kendo colleagues. Gill Sensei starting the St. Catharines Kendo Club was the catalyst for me to get back in, to rediscover my love for the art, and is one of the reasons there’s a Niagara Kendo Club today. He’s influenced who I am today in ways I am only now coming to realize.

Gill Sensei’s health was in decline for years and he made the choice to request medical assistance in dying. As he said, the dignity of life was long gone for him. I think, as I’m writing this, the time for his procedure is drawing near. He’ll be gone by the time I’m finished composing my thoughts, but honestly I’m already in mourning.

We have an opportunity to learn from everyone we meet. I learned much from Gill Sensei and could have learned a lot more if I’d been more open, less sure of my self, more humble, less arrogant. By the time I met him he’d lived through more than most people would care to experience, and he was giving his time to train people in kendo, to share with them his passion for the art. We had a lot more in common than I realized when I was young, and now with the benefit of reflection I am starting to comprehend what is being lost with his passing.

I hope he gets his chance to train with the masters who’ve gone before. I hope he saves me a keiko. I’m sure he’ll have much to teach me.